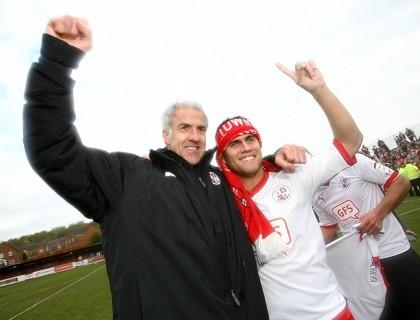 Crawley held up by battling Stevenage

Crawley's play-off challenge took a dent at the Broadfield Stadium where Stevenage battled for 63 minutes with 10 men to earn a creditable 1-1 draw.

Boro had defender Miguel Comminges sent-off for a second bookable offence before caretaker player-manager Mark Roberts headed the visitors in front five minutes before the break.

Roberts struck at the far post after a free-kick from Luke Freeman was helped on by David Gray.

Crawley levelled 10 minutes after the break through midfielder Matt Sparrow who fired into the bottom corner following a pass from Paul Hayes.

Stevenage keeper Steve Arnold made superb late saves from substitute Billy Clarke and Hayes as Crawley were held to a fifth draw in their last six games.

In-form Crawley striker Jamie Proctor should have given his side the lead after only three minutes when he blazed over from a good position after beating two defenders.

Crawley keeper Paul Jones was later forced to make a good block with his legs from a goal-bound shot by Freeman.

The hosts had a let-off on 25 minutes when Jones could only parry a shot from Robin Shroot and Marcus Haber put the rebound wide.