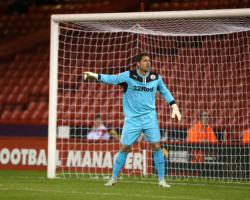 Crawley Town 2-2 Scunthorpe: Match Report - view commentary, squad, and statistics of the game as it happened.McLeod on spot as Reds claw it backCrawley battled back from two goals down to snatch a 2-2 draw at home to Scunthorpe thanks to late goals from Dean Leacock and Izale McLeod.Striker Luke Williams drove over early on for Scunthorpe and Gary McSheffrey later had a shot blocked before the Iron broke the deadlock when Paddy Madden hit his seventh goal of the season in the 25th minute.A defensive slip by Crawley defender Sonny Bradley allowed Luke Williams to burst through and McSheffrey had an opportunity to score before the ball came to Madden, whose side-foot finish beat debutant goalkeeper Lewis Price.The Iron suffered an injury blow in the 34th minute when Spanish defender Miguel Llera sustained damage to his right leg in a collision with Gwion Edwards and had to be stretchered off

He was replaced by Shaun Brisley.Crawley had their first effort on goal when Bradley headed over and veteran defender Leacock wastefully volleyed over just before the break.Defender Andrew Boyce headed just wide for the Iron just after the break from an in-swinging corner from McSheffrey.Scunthorpe doubled their advantage in the 55th minute through Lyle Taylor, who touched in a cross from the left by McSheffrey.Crawley's top scorer McLeod had a goal-bound shot parried by Scunthorpe goalkeeper Sam Slocombe before Leacock reduced the deficit when he headed in a cross from Ryan Dickson 14 minutes from time.McLeod rescued a point for Crawley with an 80th-minute penalty after Dickson was fouled by visiting substitute Jennison Myrie-Williams