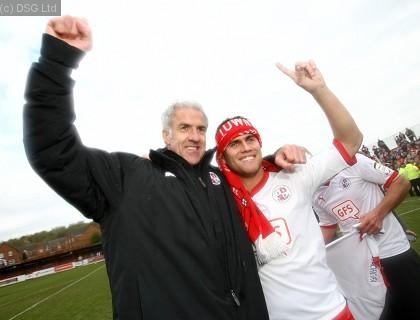 Chelmsford City's interest in the FA Cup was ended at the second-round stage for the second successive season as Crawley eased to a comfortable 3-0 victory at the Broadfield Stadium.

Crawley goalkeeper Paul Jones was not tested once and former Rochdale winger Adams drove the Red Devils ahead after 23 minutes with an angled shot across keeper Stuart Searle after an exchange of passes with Josh Simpson.

The npower League One side had put their opponents under early pressure in a totally one-sided tie and a shot from Sergio Torres was deflected over by Alexander before Searle denied Clarke twice in quick succession.

Chelmsford were reduced to 10 men 10 minutes before the interval when Simmonds collected a second yellow card for a late tackle on Mat Sadler.

Crawley's dominance saw defender Claude Davis head over at the far-post shortly after the break and Torres was also off target with a shot from long range.

Chelmsford had a let-off just before the hour mark when a fierce 30-yard drive from Mark Connolly cannoned back off the underside of the crossbar.

Hope Akpan forced busy keeper Searle to parry his shot and Clarke was similarly denied before the former Blackpool forward shot wide with the goal at his mercy.

Skipper Alexander sealed Crawley's victory a minute from time from the penalty spot, his first goal for 11 weeks, after Anthony Cook brought down Torres.